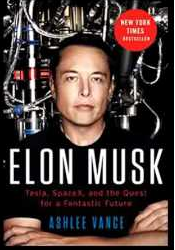 The history of Elon Musk - the genius who created PayPal, Tesla Motors and SpaceX

One might wish to make the world a better place, because otherwise there is no logic. Mark Zuckerberg wants to connect people on Earth, but the people use the platform to share photos of their babies. Musk wants to save mankind from self-destruction as a backup plan to make humanity multi-planetary.

One of my favorite qualities Ellen is the ability to take important decisions fairly quickly. It works well now.
A characteristic of modern man is procrastination - delaying action, finding excuses to not make the necessary small steps toward goals that will bring a big change in the long run.

We were indoctrinated belief that we can do anything.
To "succeed" or at least in the popular image of success, you have to believe. It is not possible - have no self-confidence to get out of the house and the next minute to change the world in any way.
"I was very close to death - said Musk - It's a lesson I learned from this to take your vacation. Holidays will kill you. ”
Ellen Musk contracted malaria during his vacation and sick for months.
The most striking part of the character of Ellen as a boy was his desire to read. From very small he always had a book in his hand. It was not uncommon to read 10 hours a day. If it was weekend, he reads two books a day.
At one time they ran the books that I read in the school library and adjoining library. And this was perhaps the third or fourth grade.
Suffering helped make him stronger and have extra amount will motivation and confidence.
He does not see value in it to suffer publicly. It saddens me, if you have to talk about it. It does not bear well for the future. If you have other children and responsibilities, then - to sink into depression do not do good, nor the people around you.
In any passing person - it is important to remember that these things happen. What's more - it has happened before. I see the point from time to time person to look at yourself and life from afar.
I think there are too many people who pursue things Internet, finance, law. It's part of the reason why the world is progressing much.
In this respect, and I myself did not help much. The projects I work on are mainly aimed at the Internet.
While other countries and businesses were paralyzed by indecision, lack of action during the crisis, Musk working hard on products to reduce global warming, besides working hard and an escape plan - just in case.
Very few Start-ups understand the main objective. It must be giving long-term value, especially if you alter the status quo, which will inevitably went through periods of high uncertainty. This causes people to be obsessed to be distracted by the volatile price of the shares instead are focused on creating better products.
Knowing Musk bluffing. He tells investors that will invest 40 million of his own money in SpaceX. And this tactic happen to work.
And millionaires do not lie is alien.
This that he gone through in 2008 would have felled any other. He did not just survived. He continued to work and stay focused. The ability to stay focused in the eye of the crisis is one of the main advantages of Musk's competitors. Many people who have succumbed to such tension burned. Decisions have become worse. And Ellen becomes hyper-rational. He still managed to take a very clear and long-term solutions. The more severe, so it becomes better. I had never seen anybody able to bear such pain.
If you could find a way so that you do not have to eat so that they could work more, I would not eat. I wish there was a way to receive nutrients without having to take the time to eat.
Musk seemed like not leaving office ever. He slept like a dog. Every day I came into the office and it woke up. Whether bathed weekends I could not say.
Here's what slog need to succeed person.
It seems inexplicable, but the remaining space industry has made so that space may seem boring. Russians who dominate the sending of things and people into space, doing it with old equipment decades. When young people enter the aerospace industry they either laugh or start crying on the condition of the machines.

Ellen word "no" does not exist and he expected this behavior from everyone.

What Musk would not tolerate excuses are or lack of a clear plan of attack.

If the rules are such that make progress impossible, then maybe you should start to fight against the rules.

You only need to make a decision and do it. The automotive industry is so indecisive. You have to see it to work elsewhere before approving the project and replicated them.
A characteristic feature in many areas. Everything was ever possible before anyone prove that it is possible.
Filling one achievement after another, he turns from talking a lot in one of the current people in Silicon Valley. People with good ideas are always considered insane, while their ideas do not become reality.
Buy from Amazon